Face masks and coverings are now the required fashion on almost all major airlines and inside airports.

Rules requiring face masks on American Airlines and Southwest Airlines flights went into effect Monday, as the two North Texas-based carriers joined most other major airlines in the country trying to stop the spread of COVID-19 and calm apprehensive passengers.

Delta Air Lines and United Airlines adopted the face-covering rules a week ago and many airports are also requiring masks or coverings.

“I think it will make people feel better about flying, at least if you have to be on a plane,” said Seth Kaplan, a transportation analyst and longtime industry observer.

So far, there has been little pushback to the face mask rules, Kaplan said.

Where and when passengers need to wear face masks varies from airline to airline and even from airport to airport. 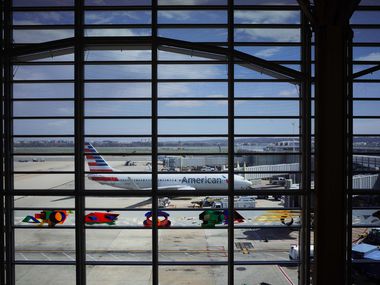 Southwest customers need to wear face masks “anywhere that social distancing is not feasible,” including “checking in, boarding, inflight, deplaning” and “retrieving baggage.”

American Airlines passengers only need to have face masks on hand when they’re entering a plane.

Both airlines, along with United and Delta, say they have limited numbers of face masks to give passengers if they don’t have their own.

Most customers have been happy with the rules since they started going into effect last week, Kaplan said.

The criticism seems to be from passengers who are upset that too few people are wearing face masks on crowded planes.

Come on @AmericanAir this is NOT ok. Also love how airline staff aren’t enforcing people wear their masks properly. I’m traveling to see someone with a very compromised immune system. This is not OK. pic.twitter.com/jQNEJOMZQs

Airlines are giving exemptions to small children who aren’t mature enough to keep a mask on and to those with medical conditions that prevent them from wearing one. Customers can also take them off to eat or drink on the plane.

Airlines are also requiring employees who interact with the public to wear masks and maintain safe distance in break rooms.

Dallas Love Field is among airports requiring passengers and employees to wear masks. The airport is following mandates by Dallas County, spokesman Christopher Perry said. Perry said at least 90% of airport passengers are wearing masks and nearly all employees.

However, the airport isn’t fining or denying access to people who don’t wear masks, Perry said.

DFW Airport has not posted any requirements about wearing masks.

Customers had become accustomed to nearly empty planes over the last two months. Airlines have cut back on routes and the number of travelers is starting to rebound, so planes are bound to be more full, Kaplan said.

Airlines have made promises about reducing capacity. Delta CEO Ed Bastian said the airline won’t sell middle seats and Southwest said it will only sell planes to two-thirds capacity. American has stopped selling some rows and is allowing customers to move around their assigned section.

“Those crowded flights aren’t the rule yet, but when you consolidate enough flights, at some point you are going to end up with more crowded planes,” Kaplan said.