President Trump called the number of COVID-19 cases in the U.S., which is the highest in the world, a ‘badge of honor.’

As President Donald Trump traveled Thursday to Michigan, where he visited Ford’s Rawsonville Plant, doctors and a nursing home worker spoke out about what they say are failures in the federal response to the coronavirus pandemic.

While Trump pushes for reopening businesses and restarting the economy, Rob Davidson, executive director of the Committee to Protect Medicare, said large-scale reopening would be dangerous because there still isn’t enough COVID-19 testing or supplies of personal protective equipment, such as medical masks, gowns and gloves to keep health care workers and patients safe. 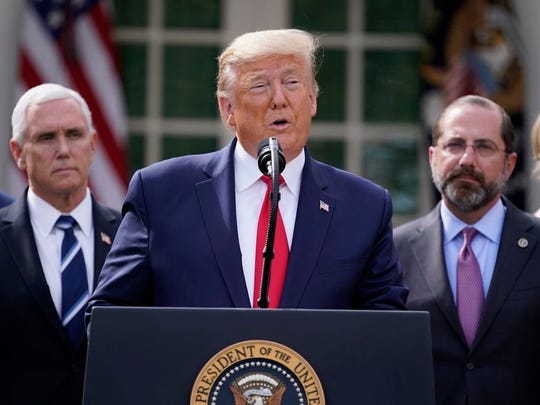 President Donald Trump speaks during a news conference about the coronavirus in the Rose Garden of the White House, Friday, March 13, 2020, in Washington. (Photo: AP Photo/Evan Vucci)

“We currently are testing about 350,000 people per day. I think the maximum I’ve seen is 400,000 in one day, and … public health experts across the country and in our own government tell us we need at least a million tests per day,” said Davidson, who also is an emergency physician in western Michigan. “So we are falling short.

“Now, in the midst of that lack of testing, he is pushing Americans to reopen the economy quickly, pushing governors across the country to reopen hastily, and as medical professionals, we’re concerned that he’s … pitting public health versus the economy and he’s putting people’s health and safety at risk.”

Trump has called the nation’s COVID-19 testing initiative a “badge of honor” and has claimed the U.S. not only has sufficient testing capacity, but is outpacing the world in the effort.

“In the span of just a few short months, we’ve developed a testing capacity unmatched and unrivaled anywhere in the world, and it’s not even close,” Trump told reporters at a White House news briefing earlier this month. “This is a core element of our plan to safely and gradually reopen America.”

But a USA Today fact check of those claims suggests the nation still trails other countries in per capita testing, including Australia, Italy, Russia, Canada, Denmark, Austria, Switzerland, Belgium and Iceland.

Trump also said the U.S. has conducted more than 9 million tests, which he correctly says is the most completed by any nation. That represents a single test for less than 3% of the population. 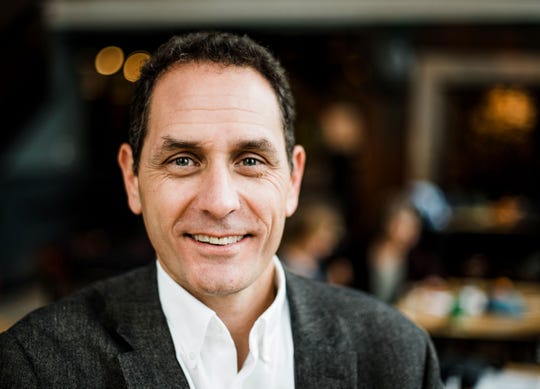 Michigan has been among the hardest hit states in the COVID-19 pandemic, and has had among the most restrictive stay-at-home orders in the country. The restrictions have sparked nearly weekly protests at the Capitol in Lansing. Trump suggested in tweets earlier this month that Gov. Gretchen Whitmer should compromise with protesters.

“The Governor of Michigan should give a little, and put out the fire,” Trump said on Twitter. “These are very good people, but they are angry. They want their lives back again, safely! See them, talk to them, make a deal.” 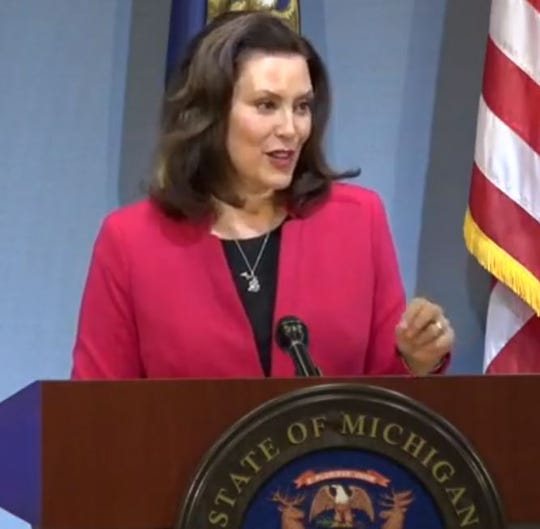 Thursday morning, Whitmer announced that she has signed executive orders to phase in some sectors of the economy, allowing veterinary offices, dental offices and nonessential medical services to resume May 29. Auto sales showrooms and other retail companies may reopen on a by-appointment basis May 26, so long as they limit occupancy to 10 customers at a time.

More: As Michigan businesses reopen, Gov. Whitmer says they must have a COVID-19 response plan

And earlier this week, Whitmer announced the reopening of retail sales, and bar and restaurant service in the Upper Peninsula and parts of the northern lower peninsula, but mandated that they adhere to social distancing rules, masking and occupancy limits.

Davidson said it’s vital to have more and better testing to more fully reopen the state and the country without another surge in COVID-19 cases.

“The most responsible way to reopen our economy is to do it carefully with robust, reliable nationwide testing so we can anticipate outbreaks. Yet he (Trump) refuses to come up with a plan and, really, to this day is continuing to endanger people.”

Dr. Farhan Bhatti, who is the Michigan state lead for the Committee to Protect Medicare and CEO of the nonprofit, Lansing-based Care Free Medical, the problem isn’t just a lack of testing, but it’s also the need for accurate and reliable tests.

“We don’t have a vaccine. We don’t have an effective treatment,” Bhatti said. “And so, in light of this, we know that keeping people safe is going to be hard. … President Trump should both ramp up our capacity, but also crack down on the myriad of unreliable tests that are flooding the market. 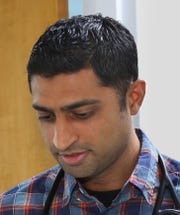 “As a physician, I’m really concerned that these unreliable tests are giving people the false sense of security against COVID-19, especially antibody tests. Many of them have not been approved by the FDA, or they were rushed to the market.

“Michiganders and Americans across the country deserve real answers instead of an election year photo op. Now is not the time to be taking a victory lap.”

“The reusing of the masks for weeks has sent the staff into panic mode,” she said. “My co-workers feel endangered by the lack of PPE. They are afraid for their families at home. Some of my co-workers have been refusing work because of they don’t have enough safety equipment to do their jobs without fear.”

She wants the president to consider fully implementing the Defense Production Act to mobilize the American companies to manufacture that equipment en masse.

“This is going to require us to go back to what we’d seen during World War II, when Ford stopped making cars and started building bombers and tanks.

“America didn’t need to be left in this position. … Until President Trump fully addresses the seriousness of the COVID-19, and gives states like Michigan enough masks and testing, we are not ready to reopen safely.”

Ford’s Rawsonville Plant, where the president went Thursday, has been making ventilators for the national stockpile and is one of several stops on a presidential tour highlighting U.S. manufacturers who’ve stepped up in the pandemic to produce PPE and medical supplies.

People need the ‘lighter’ side of politics