Adewumi did so on May 1 at the Fairfield County Chess Club Championship, where he scored 4/4 in games with a 30-minute time control.

Below are three of Adewumi’s games from the Fairfield County Chess Club Championship. One victory was against IM Justin Sarkar.

Adewumi’s new success was picked up by WABC, where he was interviewed in their well-known Eyewitness News program on May 10.

“It feels very wonderful; it feels very good. I’ve been trying to get it for some time now, since the pandemic, so it feels very relieving to finally get the title,” he said.

As he’s 10 years old, it’s no surprise that Adewumi is a well-known player on ChessKid, Chess.com’s child-friendly subsidiary website. For instance, he was a qualifier for the 2020 ChessKid Youth Speed Chess Championship, and here he is discussing his game versus Hikaru Nakamura.

Adewumi played a mini-match against another ChessKid star, CM Shreyas Royal, and also faced FM Mike Klein (FunMasterMike on Chesskid) in a series titled “The Old Man and the Tani.” Klein can also briefly be seen playing Adewumi in the Eyewitness News report above.

The duo will be back on May 13 at 2 p.m. Pacific / 23:00 CEST on Chess.com/TV for the special show “Tani Is a Chess Master” where Adewumi will show off key moments from his recent tournament that made him a master, and viewers may get to play him as well. 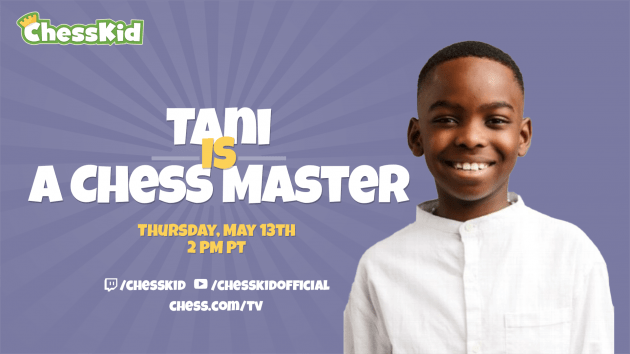 Adewumi was seven years old when he, his parents, and his older brother fled from Nigeria. The family immigrated to New York, where Adewumi won the New York State K-3 Championship (the group for children between kindergarten and third grade) at eight. The story was widely reported in mainstream media and was also covered in an early biography from 2020 titled My Name Is Tani… and I Believe in Miracles.

The creaking foundation of the Fourth Republic