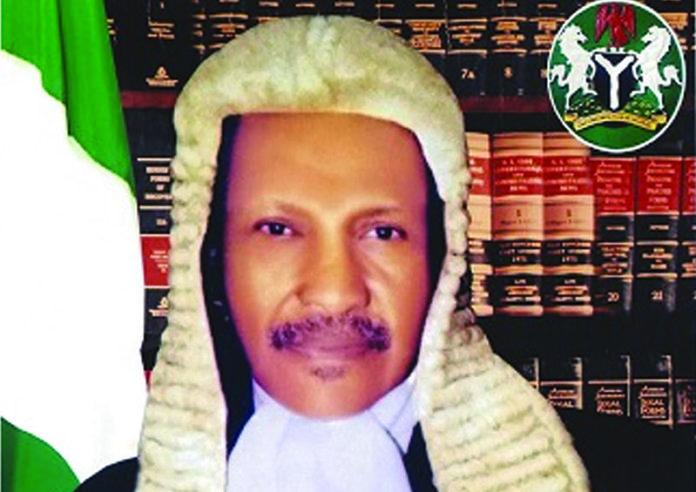 Justice Olabode Rhodes-Vivour bows out gloriously from the Supreme Court tomorrow, after 24 years on the bench, 11 of which he spent at the apex court. Davidson Iriekpen chronicles the illustrious career of this prominent jurist

Tomorrow, a great mind, peaceful soul and one of the intelligentsias in the highest court in the country, the Supreme Court, Justice Olabode Rhodes-Vivour, will bow out after 24 years on the judicial bench, 11 of which was spent in the apex court
As it is customary, a special valedictory court session would be led by the Chief Justice of Nigeria (CJN), Justice Ibrahim Tanko Muhammad, at the Supreme Court Complex, Abuja tomorrow at 10.a.m, in his honour.

Both at the High Court and Court of Appeal, Justice Rhodes-Vivour not only delivered landmark judgments, but also conducted himself with decorum. These attributes he took with him to the Supreme Court, where he held sway for over 10 years.
At the apex court, he delivered many judgments that helped to enrich the country’s jurisprudence and redefined the political space. He also, in no small measure, delivered judgments that put judicial imprimatur on many political, electoral, business and family disputes. And coming from a family of lawyers and judges, helped immensely in shaping his future as a jurist.

He attended the Lagos Law School and was called to the Nigerian Bar in 1975. He started his career as a Pupil State Counsel in 1976 and in 1978, became a state counsel and rose to become a senior state Counsel by 1982.
In 1983, his Lordship travelled to Chicago, U.S.A for Advanced Course in Legislative Drafting and also got Certificate in Legislative Drafting in School of Law, Nairobi, a course conducted under the auspices of Commonwealth Programme in 1979.

He was promoted to the position of Principal State Counsel in 1984, and by 1989, his hard work and career progression had earned him the position of Director of Public Prosecution (DPP) Lagos State, a position he held till 1994.
His Lordship was appointed to the bench as a Judge of the High Court of Justice, Lagos State, on February 18, 1994. His distinct attributes of service led to his elevation to the Appeal Court on April 25, 2005.

Rhodes-Vivour has attended various International and Professional conferences within and outside the country. He is a recipient of many notable awards amongst which are Lagos State Judiciary Merit Awards in recognition of invaluable service to the High Court of Lagos State (2003), commander of the Federal Republic of Nigeria (CFR) in 2012 and has also been a Life Bencher since (2016).
As he bows tomorrow, Rhodes-Vivour stands tall among his contemporaries especially, since he is not leaving the bench with scandal or blemish.

No doubt, his retirement and the death of Justice Sylvester Ngwuta will create a huge vacuum at the apex court. Only in November last year did the court recover from a downward trend that had brought the number of justices of the court to an all-time low in 2020.
Within five years, President Muhammadu Buhari’s lukewarm attitude towards judicial appointments helped the number of judges of the court to fall to 12 with the retirement of Justice Paul Galumje in April 2020.

Although five judges were appointed to the country’s highest bench between November 2016 and January 2019, the number was just half of the 10 that retired between February 2016 and the time Galumje retired.
With a backlog of cases dating back to 2010 still in the court’s docket, some of the few remaining judges, including the Chief Justice of Nigeria, Muhammad, began to seize various opportunities to speak publicly about their heavy workload and the need to urgently fill the vacancies on the bench.

The downward trend was, however, stemmed in November 2020, when eight justices were inaugurated at a go, drastically jerking the number up to an unprecedented 20. The appointment ignited hope that the apex court would soon, for the first time in history, attain the full complement of 21 justices.

But instead of reaching the full complement, the number, is slipping back into a reverse trend, four months later, starting with Ngwuta’s death on March 7 and the retirement of Rhodes-Vivour tomorrow.
As he bows out tomorrow to bring the number of judges of the court to 18, five of his colleagues, including the CJN, Justice Muhammad, will also be exiting within the next 33 months. With the retirement of Rhodes-Vivour, Justice Mary Odili, who will also retire from service on May 12, 2022, automatically becomes the second most senior justice of the court. Eleven days after Justice Odili’s retirement, Justice Ejembi Eko will follow on May 23, 2022.

The CJN himself will retire on December 31, 2023 – about seven months after President Buhari would have completed his second term in office.
According to an online news portal, if Buhari’s tardiness in treating judicial appointments persists till the end of his tenure, it means that by the time the president, who inherited a Supreme Court with 17 Justices in May 2015 is leaving office in May 2023, the number of the justices would have plummeted to 14.

In June 2019, when the court had 16 justices, the president wrote the CJN, asking him as the chairman of the National Judicial Council (NJC) to “initiate in earnest the process of appointing additional five Justices of the Supreme Court of Nigeria to make the full complement of 21 Justices”, as contained in the Nigerian Constitution.

The NJC immediately swung into action, and by the end of October 2019, the body had recommended four Justices of the Court of Appeal to the President for elevation to the apex court’s bench. But Buhari refused to act on the list for almost one year.

While the list of the four nominees was still pending the NJC recommended another four candidates to the president for appointment to the Supreme Court bench in August 2020. Buhari still did not take any action until September, when he merged the old and new lists and sent the eight names to the Senate for confirmation.

The Senate confirmed the appointments on October 13, 2020, but they would not be sworn in until about three weeks after on November 6 due to what was publicly understood to be a communication gap between the NJC and the presidency.
By the time the eight justices were inaugurated in November, they were not enough to push the number of judges on the apex court bench to the full complement of 21 that Buhari had set out to achieve in 2019. The appointment of the immediate-past CJN, Walter Onnoghen, also followed the same pattern of delay.

While the NJC recommended Onnoghen to the President on October 13, 2016, Buhari refused to forward his name to the Senate till the retirement of then outgoing CJN, Mahmud Mohammed, who retired on November 10, 2016. The president subsequently named Onnoghen as the acting CJN and refused to act on the NJC’s recommendation for months.

It took Vice President Yemi Osinbajo, who was then Acting President during Buhari’s medical vacation abroad, to forward Onnoghen’s name to the Senate for confirmation. The Senate subsequently confirmed his appointment on March 1, 2017, and he was sworn-in by Osinbajo on March 7.

The appointments of the incumbent President of the Court of Appeal, Monica Dongban-Mensem, the Chief Judge of the Federal High Court, John Tsoho, his predecessor, the late Adamu Kafarati, and the present President of the National Industrial Court, Benedict Kanyip, also suffered months of unexplained delays caused by the president.

The last set of 12 justices of the Court of Appeal waited for about seven months before President Buhari approved their recommendation by the NJC and were inaugurated in June 2018. The delay in the appointment of judges has a direct negative impact on the justice system.

The CJN, Muhammad, made this point at the valedictory court session held in honour of then retiring justice of the apex court, Amiru Sanusi, on February 3, 2020.

As of that time, Justice Sanusi was leaving 13 justices behind on the bench, while the recommendation of four candidates to fill the vacancies was pending and unattended to by Buhari.
The CJN warned that retirement without due replacements would leave the court overburdened as the court received more cases on a daily basis.

His words: “You will recall that barely seven weeks ago, being Thursday, December 12, 2019, we assembled here to honour our brother, Justice Kumai Bayang Aka’ahs, in a similar valedictory session.

“That ceremony painfully occasioned the depleting of our ranks at the Supreme Court. In a similar fashion, this session, too, is billed to further drastically reduce the number of Supreme Court justices as low as 13. This is not cheering news in view of the ever-increasing number of appeals that floods the court on a daily basis.”