– The video caught attention online and Stonebwoy himself shared it on his personal Twitter handle, expressing gratitude to police

– Thousands of Ghanaians have also reacted to the trending video

Some beautiful Ghanaian policewomen have joined the Putuu challenge as a video of them dancing to the song has hit social media.

In the footage sighted by Legit.ng on the verified Twitter handle of the dancehall artiste himself, the four ladies were seen in a room that appears to be at their station.

It is not stated how long the ladies have rehearsed the dance, but their coordinated moves showed that they practised for a while.

Watch the video below:

Exciting facts about the life of Rebecca Black

The amazing video heaped thousands of heartwarming, hilarious, interesting and touching reactions, but a few mean ones too as expected.

Kwadwo Dery cautioned Stonebwoy about the sharing of the video as it could make the ladies lose their jobs. 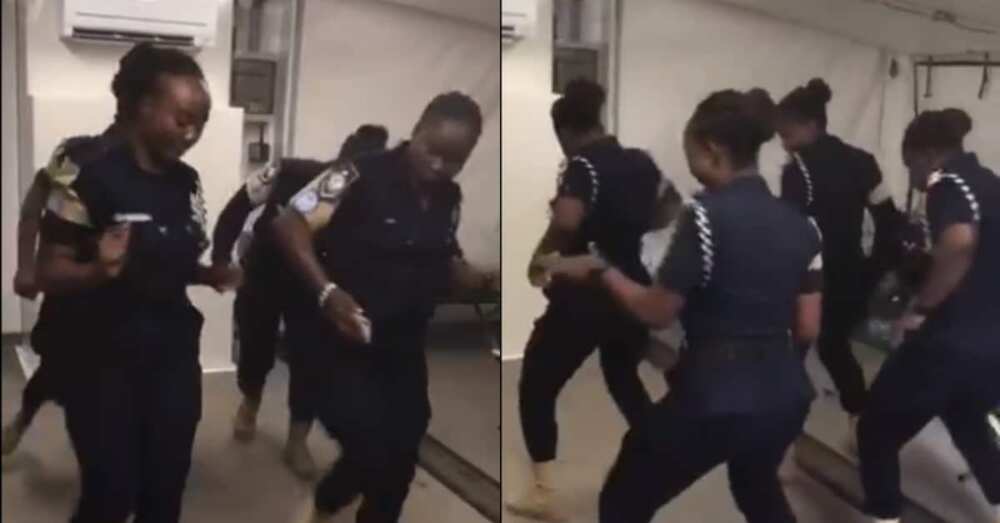 KD also opined that the video showed the ladies had little to do at the time.

Since Putuu by Stonebwoy hit social media, it has been trending wildly and got many Ghanaians joining the trend to record dance videos using the song.

In a separate report, a young senior high school girl dancing to Stonebwoy’s trending Putuu song with all her energy went a bit too far and ended up on the floor in a hilarious footage.

Enjoy the fantastic song by Mr. P – Too Late

The young girl was in the classroom when the song started playing in the background, and she decided to join the social media trend with a dance video before things fell apart.

In other news, a group of female police officers went beyond the call of duty to help a young lady in labour on Wednesday, February 19.

The woman had gone into labour and was waiting for an ambulance outside the police station when her bundle of joy decided to make an arrival.

The officers, who were identified as Captain Bucyee MaScubu, Sergeant Thulie Ndlovu and Sergeant Nokukhanya Madlala, helped without hesitation. They assisted the lady and helped deliver the baby.

CAN happy with reopening plan