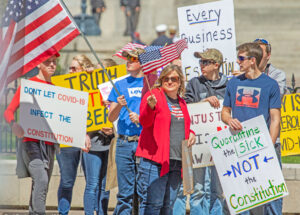 EXECUTIVE SUMMARY: Opinion polls from all over the world show that most of the public is satisfied with how its leaders have handled the medical aspects of the coronavirus crisis, including the use of location and tracking methods at the price of infringing on privacy. This contrasts to widespread dissatisfaction over the handling of the economic aspects of the crisis and greater concern over its economic than its health implications.

In recent months, numerous research institutes around the globe have surveyed aspects of the coronavirus crisis. The findings show similar perceptions all over the world on such issues as government actions in medical, physiological, and mental health matters; readiness for measures that interfere with individual rights; degree of personal concern for health; economic effects at the individual level; provision of reliable information; use of various means to prevent infection and treat the sick; assistance for the business sector; the speed and effectiveness of steps taken to exit the crisis; and so on.

Opinion polls examine subjective attitudes and perceptions. Other wide-ranging studies are also taking place that collect objective data. Those studies look at numbers of tests performed, numbers of patients in hospitals and on ventilation, mortality and recovery rates, rates of dismissal from work, numbers of workers on unpaid leave, grant and loan recipients, and more.

The Gallup International Association recently conducted two global opinion polls. The first, in March, surveyed about 25,000 people in 28 countries, and the second, in April, surveyed about 17,000 people in 17 countries. These polls found that most of the public support their leaders and the ways they are handling the medical aspects of the crisis. The March survey found that an average of 62% support their governments while 38% do not. The April survey found a slightly higher average support level of 68% against 32%.

Table 1: Support for the government’s handling of medical aspects of the coronavirus crisis (support + strongly support): 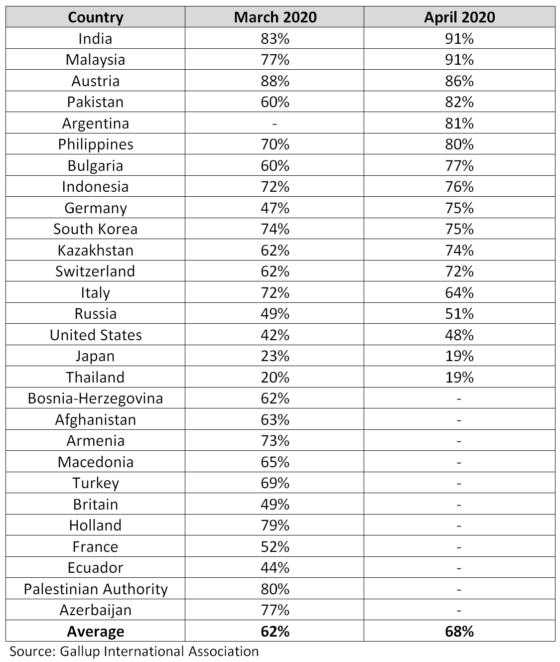 Attitudes in the US

In the Gallup polls, the American public was split in its attitudes toward the coronavirus-related actions of its government and particularly those of President Trump. Support for the administration ranged from 42% to 48% in the two polls, which each covered a sample of about 1,000 respondents. However, a more comprehensive poll by Reconnect Research in April that questioned some 3,800 Americans about the overall performance of the federal government found 60% support compared to 40% opposition.

Attitudes in the US are closely linked to party affiliation. The most prominent subset of supporters of the federal government (71% of them) are Republicans aged 50 and over with an education level at high school or less. Support among Democrats is 48%.

A Pew survey conducted at the end of March found that a 45% minority support President Trump’s actions while 55% oppose them. A poll by the same institute in April had a similar result. Fifty-four percent said they believe the president is not providing a satisfactory economic response compared to 46% who support it; 55% believe he is not providing a satisfactory response to the needs of hospitals and their staff compared to 45% who believe he is; 57% think he is not providing the public with credible information while 43% think he is; 65% think he was too slow in his response to the crisis while 35% think he acted in time; and 66% think criticism of his performance in the crisis is justified while 34% believe it is not. Here too, party affiliation is a strong factor. Most Republicans (80%) support Trump’s approach to the crisis while only a minority of Democrats (20%) support the Republican president.

Table 2:  Rates of support for President Trump’s handling of the crisis (April 2020)

Other surveys conducted in various American states found even lower rates of support for Trump’s performance and actions in the crisis. For example, in New York State, 63% are opposed to the president and only 37% support him.  In Massachusetts, opposition to the president’s actions (70%) is much higher than support (30%).  In Florida, 46% support Trump’s actions and 54% are opposed.

In many cases, the American public makes a clear distinction between the president’s performance and that of other government figures, primarily state governors. Governor of New York Andrew Cuomo, for example, has 76% support compared to 24% lack of support, despite the severity of the pandemic in that state. Surveys by the Monmouth Institute show that the average support for state governors in the US is 72%. Fifty-one percent are not satisfied with the president’s performance, and 42% believe the advice he gives the public is harmful versus 33% who believe his advice is helpful. The rest (25%) think his advice neither harms nor helps.

Surveys in May have dealt with the issue of exiting the crisis. Most of the American public (68%) is worried that some states will be too hasty in easing restrictions, while 32% think the planned moves are too slow. Here too, there is a significant difference between Democrats, of whom a majority (87%) think the planned moves are too fast, and Republicans, of whom a majority (53%) think they are too slow (Pew survey, April 29-May 5).

Findings in Israel match the global trend of public support for the actions of governments. In a survey conducted by Maagar Mochot in March, 55% gave PM Benjamin Netanyahu’s performance a good or very good grade, 23% gave him a moderate grade, and 23% gave him a poor or very poor grade. Thus, the majority (78%) rated Netanyahu’s actions as intermediate or better. Similar ratings were given to the Ministry of Health. Fifty-three percent graded its performance as good or very good, 32% as moderate, and 15% as poor or very poor. Thus, the majority (85%) rated the ministry’s actions as intermediate or better.

In the Israeli case as in the American, attitudes were influenced not only by objective or perceived performance but also by political affiliation. The religious public (members of the National Religious and Haredi parties) gave better grades to both the PM and the Ministry of Health, while the Arab public gave both very low grades.

In a Maagar Mochot poll in April, 60% gave the PM a grade of good in his performance during the health crisis, while 73% rated him intermediate or better. Sixty percent gave his performance in the economic crisis a poor grade.

In the course of dealing with the crisis, the Israeli government decided to allow the General Security Service to carry out cellular tracking of coronavirus sufferers and their contacts. This step won some support, but also garnered opposition over possible invasion of privacy as well as fear of data leaks or other misuse of the data. Similar measures have been taken in other countries, and in the comprehensive Gallup poll mentioned above, most of the public (75%) expressed a willingness to give up some of their individual rights if doing so would help stop the spread of the virus.

Surveys show broad global public support for the actions of governments in the coronavirus crisis. The explanation could be simple: Most people are indeed satisfied and that is what they report, assuming they have no reason to lie (as survey respondents sometimes do when asked about political preferences or uncomfortable personal matters). Moreover, even those who are dissatisfied with the handling of specific aspects of the crisis (such as the treatment of people in assisted living facilities or the extent of testing) may be satisfied with the overall handling by the person or people in charge (the PM, health ministries, and so on).

Satisfaction expressed in surveys is also bolstered by the recognition that the crisis is real and lives are at stake. Many people are concerned about the damage to health and the economy, and feel this is not the right time to engage in strong criticism. Many believe this is a “war” in which people must unite, take action, and support the leaders of the campaign. Criticism may grow louder as time passes, depending in part on how long the crisis lasts, the extent of the damage, and the narrative that dominates public awareness. Signs of a decline in satisfaction and support for governments are already visible in surveys conducted in May in various countries.

Critics and supporters alike may be motivated by both practical considerations and political preferences in their assessment of performance and success. Both are legitimate. The case of President Trump is a good illustration of the complexity of this problem. Opinion polls show considerable public criticism of his performance in the crisis, with the number of those who oppose his policy greater than the number of supporters—but the polls indicate that those levels of satisfaction are influenced not only by the objective situation but also by the respondents’ personal politics.

Another element affecting public support could be respondents’ religious status. For some, satisfaction with a leader or a government is affected by belief in the power of God to both punish populations and strengthen leaders and their flocks. An opinion poll taken in Jordan shows that 83% of the public believe coronavirus is a “punishment from God.” Those people might find it easier than non-believers to accept the pandemic and the harm it causes.

The next research challenge will be an integrated analysis of the impact of objective and subjective data (independent variables) on factors such as the degree of trust in government and/or the chances of reelection of current leaders (dependent variables). Analyses of this kind conducted in Israel by Maagar Mochot regarding the performance of government ministries and/or heads of local authorities in crises such as the Gulf War (1991), the Second Lebanon War (2006), and the wave of forest fires in November 2006 show that subjective variables (perceived performance) have more influence than objective variables (actual performance), and that the “model” (one who is primarily concerned with his image) beats the “professional” (one who is primarily concerned with the correct solutions). The coronavirus crisis presents an interesting research challenge in this context.

Prof. Yitzhak Katz is the CEO of Maagar Mochot and author of Behind the Scenes of Polls, Politics and Business (2020).

4 Portable Health Gadgets That Are Worth Purchasing

African leaders commit to ending all remaining forms of polio