PROVIDENCE, R.I. (WLNE) – As the hospitality industry continues to struggle, in less than a week workers at the Omni Providence Hotel will lose their health insurance benefits, leaving hundreds uninsured during the pandemic.

And with Covid-19 far from over, workers tells ABC 6 they’re afraid of not being covered right now.

The hotel has been closed since March, furloughing 200 workers that are part of the UNITE HERE  Local 26 union.
Now, unsure of when the hotel will reopen, the company is cutting off health insurance to those workers on June 1.

“We really can’t have people being insecure in where they’re going to get their healthcare during a pandemic,” said Union President Carlos Aramayo.

Chris Cook, who’s worked at the hotel for more than two decades, says he has a pre-existing condition and his wife is a nurse on the frontlines. They also have a son.

“The fact that they’re cutting off our health insurance during a global pandemic is downright dirty to me. And I think it’s inhumane,” said Cook.

Aramayo tells ABC 6 that if people are uninsured it could lead to community spread, creating a public health risk.

“The coronavirus is sadly still spreading still affecting our health, our public health, and we’re really worried that someone is going to get sick and not go to the doctor,” said Aramayo.

An Omni spokesperson told ABC 6 that benefits will be restored once the hotel reopens and work resumes.

However Castillo, who’s worked at the Omni for more than two decades, says it’s unclear how many people will be brought back at first, meaning some will likely go without health insurance for longer than others. 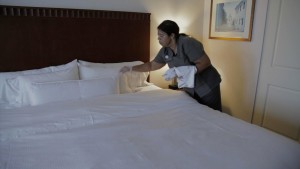 “Even though I give a lot of years to this place, even though we’re working really hard, they don’t care!” she said Tuesday.

In a statement, Omni said in part that they advised the union they would extend benefits for two months following their temporary closure in March, but after that the employees would have to pay their own premiums.