The Free Press has made this story available free of charge so everyone can access trusted information on the coronavirus.

The province’s chief public health officer says he can envision recommending the wearing of masks in all indoor public places as early as fall to help guard against the spread of the novel coronavirus.

Earlier in the day, the Winnipeg Airports Authority announced it would require the wearing of facial coverings at all times at the airport as of Wednesday.

Roussin now recommends wearing a mask when physical distancing is difficult to maintain.

However, as flu season approaches this fall, public health officials are likely to talk up mask use more and more, he said.

“Right now we don’t have any imminent plans to mandate (masks) but, just like any of our public health work, we’ll do whatever we need to do to protect the health of Manitobans,” he said.

The 12 most recent cases include: four in each of the Southern Health, Interlake-Eastern and Prairie Mountain health regions.

Most of the cases announced in the last three days have either been close contacts with a recent case or travel-related, Roussin said. 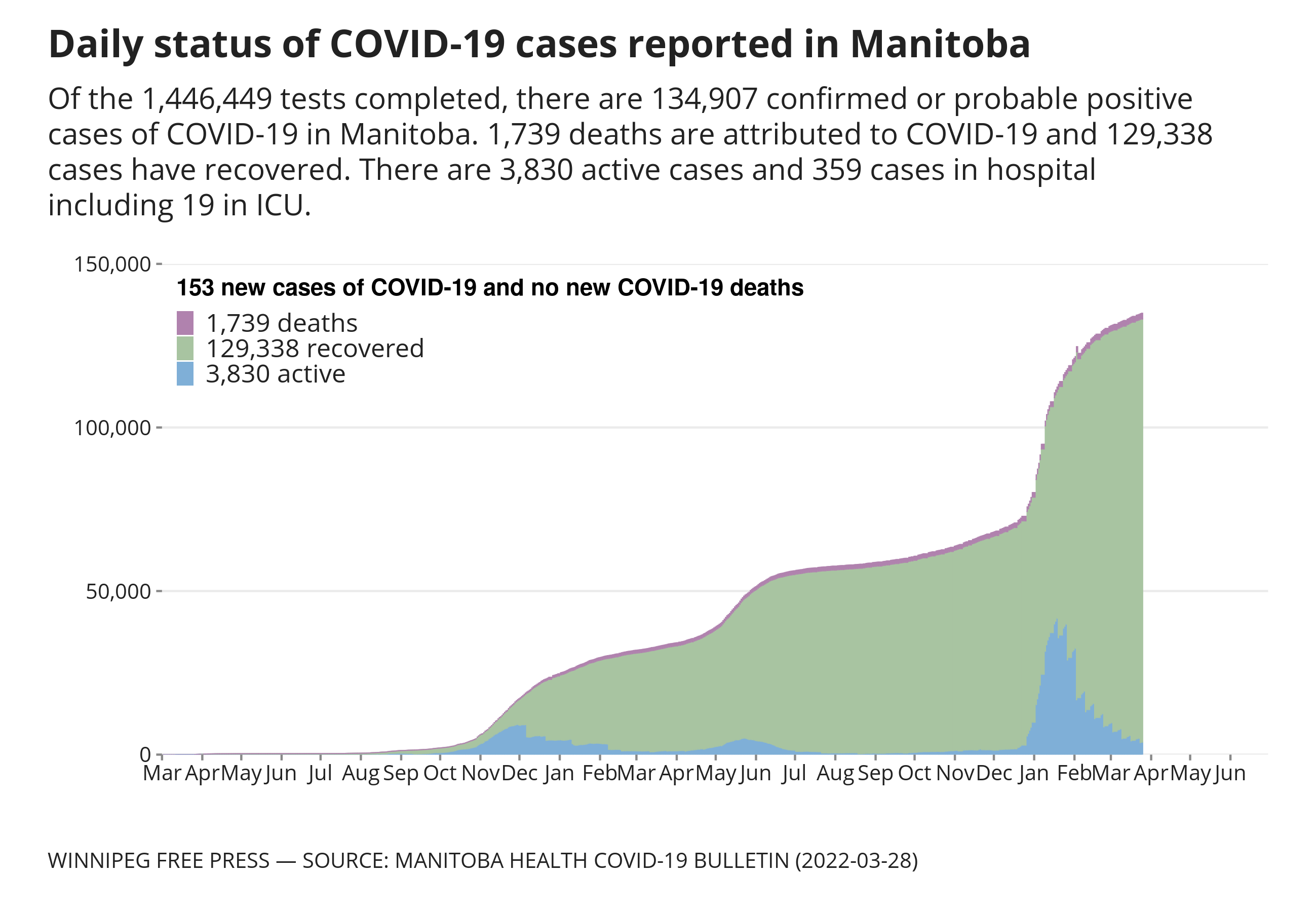 There are now three people in hospital in Manitoba with the coronavirus, including two in intensive care. Currently, there are 74 active cases.

Public health officials alerted the public Monday that potential exposure to COVID-19 may have occurred from an infected person who visited the Sherwood Grocery Store in Gull Lake while symptomatic on July 19, 20 and 21. People who are considered close contacts of the person will be contacted by health officials and advised to self-isolate. Others who were at the store on those days do not need to self-isolate but should self-monitor for symptoms of the virus, officials said.

Manitobans have recently been showing up for COVID-19 tests in higher numbers than usual. That’s kept the test positivity rate low — 0.45 per cent as of Monday morning.

An additional 1,393 laboratory tests were completed on Friday, 1,581 tests were handled on Saturday and 808 on Sunday.

Roussin said the higher test numbers are likely due to the recent bump in COVID cases — and the fact that a cold virus is circulating right now. Since COVID-19 symptoms are similar to that of the common cold, folks are getting tested, as they should, he said.

High test numbers are likely to persist in the fall when respiratory illnesses tend to become more prevalent.

Meanwhile, Roussin said public health officials have no “imminent plans” to reinstitute a two-week self-isolation requirement for folks travelling to Manitoba from the western provinces. There have been calls for that due to recent spikes in case counts out West.

Roussin advised the public, however, “to be cautious” with their travel plans “because we’re going to do what we need to do to protect the health of Manitobans.” He said that “may result in reimplementation of those restrictions.”

Health Minister Cameron Friesen, who joined Roussin at the news conference, announced that Manitoba COVID-19 press briefings will now be reduced to once a week starting this week. For the past few months, they’ve been held twice weekly. When the virus first broke out, they were held seven days a week.

“Should the conditions require it, should the situation require it, we’ll be doing this more often (than once a week),” Friesen said.

The province will continue to issue daily COVID-19 bulletins, he said.

Larry Kusch didn’t know what he wanted to do with his life until he attended a high school newspaper editor’s workshop in Regina in the summer of 1969 and listened to a university student speak glowingly about the journalism program at Carleton University in Ottawa.