– She says her father made the decision because his tradition does not support female child education, and also due to financial constraints

A Nigerian lady identified as Esther Nwankwo defied the odds and became the best graduating student of her department after struggling to achieve a university education.

The lady took to her LinkedIn page to narrate how her father ended her education after she finished secondary school.

She wrote: “According to him, his tradition does not support female child education, also due to financial constraints” 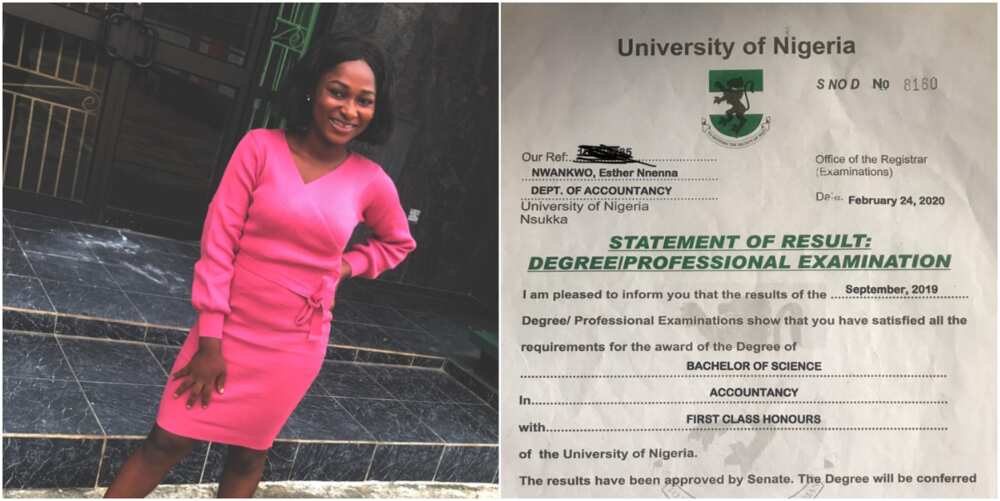 Esther says her determination to succeed made her engage in menial jobs to send herself to school . Photo credit: Esther Nwankwo/LinkedIn
Source: UGC

Esther said she was skeptical about her future but her determination to succeed kept her going, adding that she was determined and willing to pay the price of success.

She continued: “I set out on my path to become educated. I took up several menial jobs to save up for higher institution.”

Esther said she took a step and God came through for her.

She bagged a national diploma and went on to become a BSc holder in Accounting from the University of Nigeria Nsukka.

Esther, who graduated with first-class honours, became the best graduating student of her department

She said she became an AAT holder and a chartered accountant while still an undergraduate.

The young lady expressed gratitude to God and acknowledged the help she got from Nwankwo Obinna and her mentor, Alhaji Kabir Mohammed.

In other news, a Nigerian man identified as Adewale Adeniyi has inspired many people on LinkedIn with his grass to grace story.

Adeniyi said he worked as a roadside mechanic for six months without being paid during his undergraduate years at the higher institution where he studied engineering.

He said bailing oneself out of the less privileged circle is by showcasing “uncommon knowledge”, adding that one becomes irresistible by doing so.

How I graduated with a 6.0 CGPA – University of Ibadan best Geology student | Legit TV

Islamization of Nigeria – The Sun Nigeria