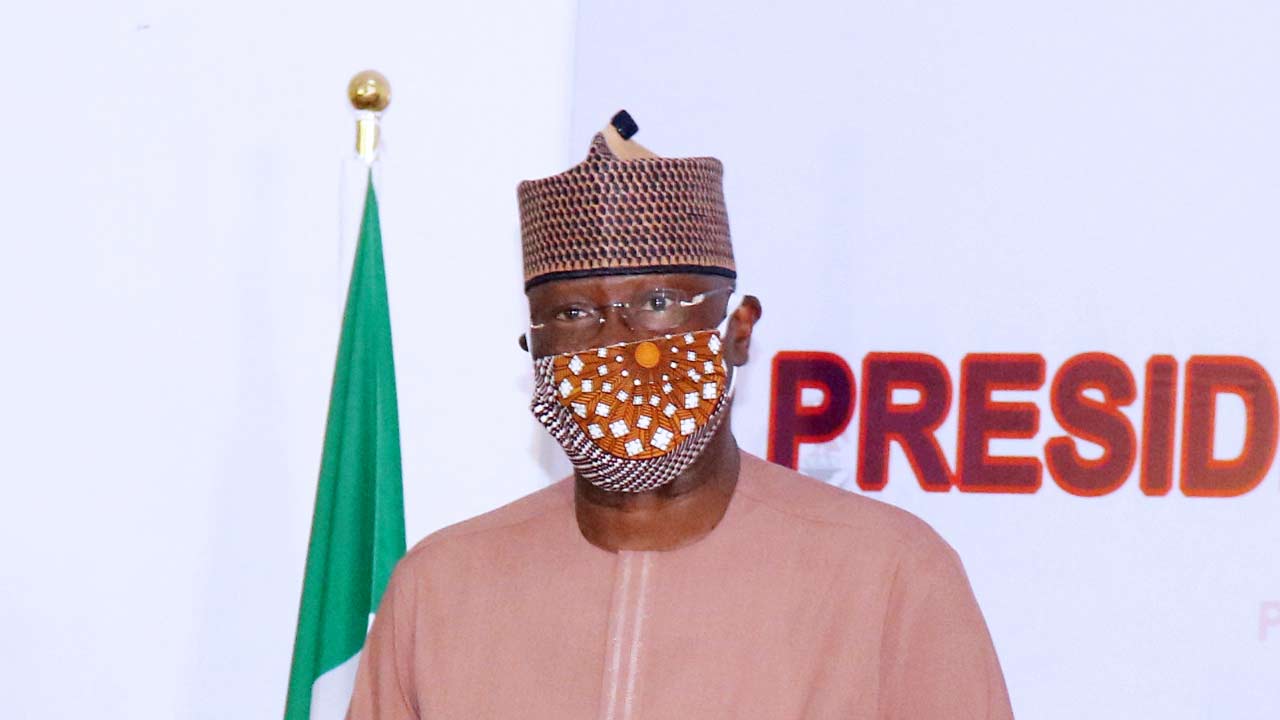 • PDP, Reps knock govt over secrecy on Chinese doctors
Life may no longer be the same again, the Presidential Taskforce on COVID-19 (PTF) said yesterday, as it cautioned churches, mosques and businesses to prepare for a change in the way they have always operated.

At the daily briefing of the task force yesterday in Abuja, PTF Chairman and Secretary to the Government of the Federation (SGF) Boss Mustapha insisted: “Behavioural change is a must for every citizen because COVID-19 has changed the world completely.”

He said: “I must also emphasise that the two additional weeks should be utilised by businesses, offices, professional bodies, places of worship, educational institutions etc., awaiting reopening to plan and adopt new strategies under a COVID-19 era in line with the guidelines.

“​The PTF COVID-19 is committed and determined to continue to provide the required leadership for this national response. In the coming days, intense consultations will be deepened with different segments of the society including the state governments, security agencies, religious and community leaders to ensure a coordinated implementation of the measures.”

Mustapha noted that with the history of pandemics in hindsight, government must delicately strike a balance between safety and economic considerations before reopening the economy fully. He also cited the 1918-1920 influenza, explaining that the PTF was persuaded by the history of global pandemics,which showed evidence of exponential rise when restrictions were lifted early.

Minister of Health Osagie Ehanire said a disturbing trend from statistics showed that most fatalities were not just linked with pre-existing diseases; many were educated, well-to-do people, who chose home-based care, where they developed complications and had to be rushed to hospital.

He said breathing complications in COVID-19 patients could arise with little or no warning; hence the reason all persons must seek medical attention when they test positive.

Minister of Interior Ogbeni Rauf Aregbesola disclosed that the 15-man team of Chinese medical experts who have been in the country since April 8, 2020 came on a 30-day visa issued in Beijing.

He explained that the Chinese helped to fix the Idu Isolation Centre and the Thisday Dome. They have finished their work but are still in the country because of the ban on air travel, the minister said.

Aregbesola’s clarification came as the House of Representatives yesterday called on Ehanire to furnish the chamber with a detailed report on the activities of the Chinese. It also asked its Committees on Interior, National Security and Foreign Affairs to probe the issue.

Dachung Bagos (Plateau, PDP), who moved the motion, recalled the controversy that had surrounded the arrival of the Chinese health workers.He expressed concern that the Ministry of Health was yet to brief the House on their whereabouts and efforts in the fight against the pandemic.

But the Peoples Democratic Party (PDP) berated the Federal Government for “its denials and cover-up on the whereabouts and activities of the Chinese medical experts it brought into our country last month.”

It therefore demanded an immediate apology from the Federal Government for “taking the citizens for granted in its handling of the Chinese Doctors’ affairs.”

The party, in a statement by its national publicity secretary, Kola Ologbondiyan, noted: “The conduct of the Federal Government in disclaiming the Chinese team and declaring that it cannot account for their whereabouts after it had accorded them state reception had further exposed the dishonesty, lack of transparency and inherent corruption that pervade the APC administration of which Nigerians have completely lost confidence.”

The PDP said: “It is bizarre that the Minister of Health, Dr. Osagie Ehanire, disclaimed the Chinese team, denied involvement and knowledge of their whereabouts, whereas clarifications by the Chinese Embassy and the China Civil Engineering Construction Corporation (CCECC) indicate that the team had been in CCECC facility and had also collaborated with our health agencies.”

The party noted that the declaration by the minister of health that government could not account for the medical team it officially received, triggered public alarm and raised suspicion of clandestine designs against the nation, consequent upon which the party issued a 48-hour ultimatum to the Federal Government.

The PDP noted that the APC administration would have faced the anger of Nigerians for its lack of transparency at the expiration of the ultimatum had the Chinese Embassy and CCECC not made clarification.

“With this clarification by CCECC, the PDP demands that the Presidential Task Force on COVID-19 should come clean on the reasons it claimed ignorance of the whereabouts of the Chinese team and apologise to Nigerians.

“This is because our party believes that the health minister’s conduct betrayed a plot by certain officials of the Federal Government to deceive Nigerians and ostensibly distract public attention from the acts of corruption being perpetrated in the fight against COVID-19 in our country.”

The PDP demanded that the Federal Government immediately declare and account for all funds, equipment, therapeutics and sundry aids it has received from international and indigenous bodies and individuals, given the exposed proclivities of its officials for the diversion of such aid.

Meanwhile, health experts have reacted to the recent threat by U.S. President Donald Trump to permanently pull funding from the World Health Organisation (WHO).

In a four-page letter to WHO Director General, Dr. Tedros Adhanom Ghebreyesus, Trump set out what he called “repeated missteps” by the organisation and considered a U.S. exit if the health body did not commit to “major substantive improvements” within 30 days.

The President, Pharmaceutical Society of Nigeria (PSN), Mazi Sam Ohuabunwa, told The Guardian: “I believe it is going to be short-term or when a new president comes it will be reversed. Trump is pushing too far. The WHO announced that they are going to do an internal audit. I believe no human being is perfect. Should we sack Trump for all his errors? You cannot be bullying an institution when you have also made a lot of mistakes.

“It will be premature to judge the WHO. The right thing to say is let us investigate this especially the WHO and nations. But this unilateral threat is an Area Boy mentality, a bully. To bully, to threaten is not expected of statesmen. And I think Donald Trump is embarrassing his office.”

The President, National Association of Resident Doctors (NARD), Dr. Aliyu Sokomba, said: “For over a month now, Donald Trump has suspended funding for the WHO. The withdrawal of the funding from U.S. undoubtedly would affect the activities of the organisation and hence global health, as already shown by the funding gap announced by the WHO DG during one of his media briefings. But then, the organisation will find a way to continue to survive.”

Dr. Simon Agwale, a virologist and the chief executive officer of Innovative Biotech, United States of America (USA), said: “The impact will be very serious for Africa because most of our programmes are supported by the WHO, for example, our vaccination programme that is already complicated by COVID-19 and disease surveillance systems.”

He said this called for African countries to localize the production of vaccines and other medical supplies and drive distribution and market share growth across Sub-Sahara Africa.

In another development, some health organisations in the country complained yesterday that they had not yet received the hazard allowance promised by the Federal Government.

The National Chairman, Association of Hospitals and Administrative Pharmacists of Nigeria (AHAPN), Dr. Kingsley Chiedu Amibor, said: “We are yet to hear from the Federal Government as regards the payment of hazard allowance to healthcare workers. The initial MoU signed between the Federal Government represented by the FMoH and the tripartite unions of NMA, the PSN and the NANNM was for an initial period of three months.

“In the same vein, the government promised a comprehensive insurance cover for about 5,000 frontline healthcare professionals involved in the control of COVID-19. That one too is also being awaited by healthcare workers.”

On the matter, Sokomba, said: “Even the hazard allowance review that was widely publicised has not been implemented. We are used to promises on paper.”

Also, the National President of the National Association of Nigerian Nurses and Midwives (NANNM) and Vice President of Nigeria Labour Congress (NLC) Abdrafiu Alani Adeniji, said: “The Federal Government has not released any circular to the effect of meeting its promise on review of out hazard allowance and comprehensive life insurance. Without a circular, there cannot be any implementation in the federal civil service.”

How Okereke-Onyiuke supported me against stockbrokers I offended –Ex-NSE spokesman, Oni – Punch Newspapers