Like most Business Development Companies (“BDCs”), Hercules Capital (NYSE:HTGC) has been severely impacted by the current crisis, and its share price has plunged. However, its sector exposures and balance sheet position suggest it may have a much easier time weathering this storm compared to other BDCs. This article reviews the business, the ongoing COVID impact, risks, liquidity, valuation, and management. We conclude with our opinion about investing in this big dividend BDC via its stock and its bonds.

Overview of the Business

Hercules Capital, Inc. is one of the leading business development companies in the US, focused on providing senior secured credit to Venture Capital (“VC”) backed high growth companies. Hercules aims to take credit exposures in innovative industries such as life sciences, technology, and sustainable and renewable energy. Incorporated in 2003 as Hercules Technology Growth Capital Inc., the company was listed in 2005 and later changed its name to Hercules Capital, Inc.

The company primarily designs its credit investment agreements as debt with warrants which are sometimes coupled with equity investments. Hercules’ investment objective is to generate current income from debt investments as well as capital appreciation from warrants it receives as part of its credit investments. As of 31st March 2020, the company had a total investment portfolio of $2.3 billion at fair value spread across over 100 companies. Approximately 95% of these investments consist of senior secured debt which is secured by all or some of the assets of the portfolio companies. Industry-wise, Drug Discovery & Development Industry forms the largest portion of total investments accounting at 30.1% of portfolio.

Please note that 98% of the debt investments are based on floating rate interest rates while the remaining are fixed. The largest investment accounts for less than 4% of the investment portfolio. Most of the company’s large positions are backed by marquee Private Equity (“PE”)/VC names. The table below shows a few of the largest current investments in Hercules’ portfolio: 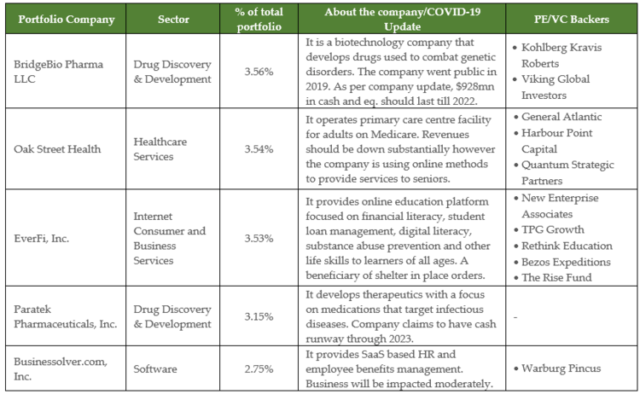 What is Happening Now: COVID

Most dividend-oriented names including BDCs have been heavily impacted by the COVID-19 crisis. Hercules dropped 55% in March and has shown some recovery since then, but is still trading at a considerably lower valuation as compared to pre-COVID levels. While some lenders with large investment exposures to highly stressed industry sectors such as energy, retail, aviation, travel and leisure are facing dramatic reduction in cash flows and large-scale interest deferments by borrowers, Hercules is less susceptible to the COVID-related downturn because of its considerably high exposure to industry sectors such as life sciences and technology. It is evident in the chart below that ETFs focused on healthcare and technology haven’t budged even a little which is a proxy for how investors view these sectors and also the relatively less damage that these sectors will experience relative to the broader S&P.

Q1 FY20 (largely pre-COVID) was a strong quarter for Hercules. The company reported total investment income of $73.6 million which represents an increase of 25% YoY. The strong growth was primarily attributable to a significantly higher average debt investment balance in Q1 2020 which was $2.2 billion, an over 20% increase from $1.8 billion in Q1 FY 19. Strong growth was observed in both interest income as well as fee-based income. Net investment income also increased sharply from $29 million in Q1 FY19 to $40.6 million in Q1 FY20 which represents a YoY increase of 40%. This level of growth will definitely moderate going forward as the pace on new investment slows and existing companies on a selective basis may ask for interest deferrals. Having said that, given the industry focus, we do not expect major disruption in the portfolio. Below are a few comments from the recent conference call that provide color on our view.

“Quarter-to-date, as of May 1, we have not added any new companies on non-accrual.” “So as I mentioned, so there have been very few instances to-dare where we have had to make modifications to any of our loans with respect to payments. It’s less than a handful. It’s an immaterial part of what we have seen so far.” – Scott Bluestein, CEO, Q1 FY 20 earnings call

Despite relative resiliency, Hercules’ portfolio did see some erosion due to mark to market. Hercules’ average internal credit rating of portfolio assets decreased from 2.15 in Q4 FY19 to 2.34 in Q1 FY20 driven by the COVID pandemic. Hercules downgraded 47 portfolio companies from grade 2 to grade 3 because of the challenging market conditions they face. However, please note that grade 4 and grade 5, which are the lowest credit grades, still form only 3.2% of the total fair value of investments.

Hercules reported an unrealized loss of $76.3 million as a result of mark to market of Hercules’ equity, warrants, as well as debt investments. This unrealized loss was the primary reason for a 6% QoQ decline in the company’s NAV.

BDCs are regulated investment companies and so they are required to distribute a substantial portion of earnings as dividends to unitholders. As such, the only source of growth funding they have is through issue of additional share or through borrowing. In Q1 FY20, Hercules raised $35 million through issue of equity shares and $50 million through issue of 4.28% notes bringing the total outstanding debt position to $1.3 billion. Please note that the company does not have any major near-term debt maturities. The next debt maturity of $440 million is scheduled in 2022. Hercules has liquidity of over $438.2 million in the form of cash and undrawn credit limits, which is estimated to be more than sufficient to meet any short-term financial obligations. Besides, the company is scheduled to raise another $70 million through notes, which will add to the already available liquidity. One offsetting factor is the company’s commitments to portfolio companies to provide funding for their operations based on milestones. The unfunded commitments balance remained flat sequentially and the company is confident it can meet these commitments with existing liquidity.

“So right now we have about $135 million of available unfunded commitments. That number is essentially flat from where it was as of 12/31. I think there’s a couple of reasons for that. Number one, we did not have sort of the expected run on the bank where every company that had available unfunded commitments called up and asked to draw. I think the companies that have chosen to partner with Hercules understand that we have a strong balance sheet, understand that we have a very strong liquidity position.” – Scott Bluestein, CEO, Q1 FY 20 earnings call

After the broader market sell-off, Hercules was recently trading at a dividend yield of 12.4% which is higher than its historical average of 10%. Price to NAV has also come down from 1.32x at the end of FY19 to current level of 1.04x. Given the minimal NAV erosion so far, and the strength in liquidity, combined with less pandemic-sensitive industries, we feel the valuation is reasonably compelling.

The company also has a few bonds outstanding. Hercules’ 4.625% 2022 senior secured notes (CUSIP: 427096AG7) are currently trading at an attractive YTM of 13.45% which is considerably higher than its historical average range of 4-6%. Please note that in January 2020, just before the market declined, the company’s bonds were yielding less than its coupon rate. Given interest coverage ratio of around 3.4 times, comfortable liquidity position, and no near-term maturities coupled with exposure to more insulated sectors, we do not think that the company will face any material difficulty in servicing the interest obligations and the YTM is attractive. Please note that this bond is illiquid, one of the more liquid bonds of Hercules – 4.375% (CUSIP: 427096AF9) has recovered significantly from ~10.5% in April to 6.258% currently so the large discount in the bond in question in this report could be due to illiquidity.

Scott Bluestein serves as the chief executive officer as well as the chief investment officer of the company. He was appointed as the CIO in 2014 and was later named CEO last year. Mr. Bluestein joined Hercules in 2010. Prior to Hercules, he served as the founder/partner of Century Tree Capital Management, a fund that focused on senior secured debt and equity investments in small- and micro-cap public and private companies. He also has experience of working at Laurus-Valens Capital and UBS Investment Bank.

Seth Meyer serves as the CFO of Hercules since 2019. Previously he worked at Swiss Re for 19 years and served as Swiss Re Commercial Insurance business’ CFO for six years. He also has experience working at KPMG and PricewaterhouseCoopers.

Most BDCs have been severely impacted by the current crisis both in terms of portfolio distress as well as the market’s perception of value in BDCs. Having said that, Hercules’ high exposure to drug discovery and software sectors makes it less susceptible to portfolio distress in this downturn. For these reasons we’ve ranked it no. 5 on our list of Top 5 Credit Stocks (9% Yields and Up) behind our report on Starwood Capital (NYSE:STWD) at no 4 (and ahead of our report on Colony Credit (NYSE:CLNC) which received an (“honorable mention”). Given the strong liquidity position, no near-term debt maturities, high coverage ratios, and only a modest impact, relatively speaking, expected on earnings due to healthcare and tech focus, we believe both the equity and debt of Hercules are attractive and worth considering.

Disclosure: I/we have no positions in any stocks mentioned, and no plans to initiate any positions within the next 72 hours. I wrote this article myself, and it expresses my own opinions. I am not receiving compensation for it. I have no business relationship with any company whose stock is mentioned in this article.