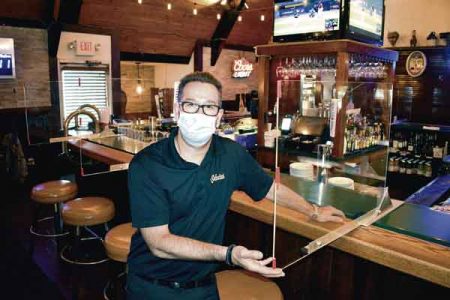 Mike Carannante, co-owner of Salvatore’s restaurant on Mahoning Avenue in Austintown, shows a clear, plastic barrier that provides separation for people sitting at the bar from other couples close to them.

AUSTINTOWN — To Mahoning County Public Health sanitarian Cory Powell, the reason the health department sends him out to investigate tips on businesses not following state rules on the coronavirus is to educate.

“Our main goal within our department is to provide education and resources for these operators,” Powell said.

The education is mainly for businesses, but it is also for the public, he said.

Over the months of the virus, the rules have changed numerous times. And the rules — including ones related to mask wearing — allow exemptions that the public may not realize.

For example, some workers have received exemptions from wearing a mask because of documented health conditions. And many restaurant cooks have been exempted from having to wear a mask because of the high temperatures in many kitchens.

The Vindicator examined about 50 complaints from Mahoning County and the followup carried out by sanitarians like Powell to see what kinds of issues have arisen. The cases were from most of June and July.

A sanitarian follows up on the calls. But in many instances, he or she closes the case after checking it out and finding that the business has a documented exemption from certain rules or because the business was not violating any current rule.

In other cases, after a business representative learns of things they are not doing correctly and promises to correct them, the case is closed, the documents show.

Powell said one of the best tools he has found for Mahoning County is to encourage businesses to post signage that reminds employees and the public of the rules.

Most of the businesses visited by The Vindicator had numerous signs posted at the entrances reminding people about the need for masks and social distancing.

“I’m a firm believer in the business providing signage,” Powell said. “It provides a visual reminder that ‘Oh, we need to have a mask on.’”

“What I’m seeing from these facilities is they have a lot on their plate right now. They have to maintain their everyday operations and now have additional (virus-related) requirements,” he said.

The county health departments in Mahoning and Trumbull counties have hotlines the public can call to report a potential violation — especially violations of the statewide face covering order. Mahoning County’s hotline number is 330-270-2858. The one for Trumbull County is 330-675-7841.

On June 22, when many Ohioans had started to think the coronavirus was on the wane, a citizen called Mahoning County Public Health’s hotline to say that coaches and players at Cene Park in Struthers were committing a number of violations.

Sanitarian Amy Holinbaugh reported that she spoke with a person in charge at the facility two days later who said he would speak with others to “address spitting and bats.”

Holinbaugh noted in the report that “masks are a recommended best practice but not currently required.” She also indicated that a ban on spitting is also a “best practice, not a requirement.” She stated that baseball equipment sharing was allowed only if proper sanitation took place between users.

Many of the complaints reviewed were like one July 17 involving Pizza Joe’s in Boardman, where a citizen reported that masks were not being worn.

Sanitarian Colton Masters checked on the complaint July 21, talking to employees. After a discussion, he asked the company to write a policy that exempts kitchen staff from wearing a mask but requiring them to wear one when they leave the kitchen to wait on customers.

A sanitarian spoke with the manager of Ben’s Restaurant and Bar on Akron-Canfield Road in Berlin Center on July 21. The manager said she briefly went into a customer area while not wearing a mask but said she enforces the mask rules for employees who work with customers.

She agreed to write a policy that requires everyone to wear a mask around customers but excludes kitchen employees from wearing one because of the high temperatures there.

A sanitarian visited the Poland post office June 16 regarding a lack of mask wearing and learned that two employees are granted an exemption from wearing a face covering for medical reasons.

A sanitarian visited the Twisted Metal tattoo parlor on South Raccoon Road on July 6 after a complaint that some tattooists were not wearing masks. One of the owners said the problems “would be corrected.”

Holinbaugh followed up on a complaint about Salvatore’s restaurant on Mahoning Avenue in Austintown on July 7. A manager said employees were trying to wear masks all the time, but “sometimes people need to catch their breath.”

The manager was advised that if any employees had a reason they could not wear a mask, the business could provide written documentation to the health department and be exempt from wearing one.

Holinbaugh sent an email to the restaurant later that day providing the reasons employees can be allowed to not wear a mask, such as health or safety reasons.

The email also suggested that if the business has employees exempt from the face-covering rules to state that on a sign “so that customers are aware and understand why some employees are not wearing masks.”

Mike Carannante, co-owner of the restaurant, on Thursday told The Vindicator the business fully understands the need to wear masks for the protection of employees and customers.

“Every rule they put out, we try to do our best to follow them,” he said.

In fact, he showed a reporter the innovative ways the restaurant is protecting customers at the bar and in a section of booth tables.

Clear, plastic barriers are in place at the bar that allow two people to sit together but have protection from other couples on either side of them.

“When a couple sits at the bar, they don’t compromise other people,” Carannante said. “We called the health department and asked the best way to make sure people are comfortable.”

The restaurant has hand sanitizer stations in view from all seating areas, he said.

A section of booth tables have clear, plastic barriers at the exposed end of some of the booths — wherever the end of the booth is somewhat close to another booth.

“This is the only weapon we have right now to fight the virus until we have a vaccine,” he said of masks and barriers.

Powell’s normal job as a sanitarian is to inspect public swimming pools, campgrounds and food businesses. Other sanitarians who are handling the complaint calls inspect tattoo parlors, landfills, water wells and septic systems, he said.

In most cases, the business operators have been cooperative and understand the reason for the visit.

“I don’t think anyone out there wants to be the reason for an increase in the spread of COVID-19. They know we have a job to do as the health department. I’m not saying everyone agrees with every order, but I think they understand our job as the health department is to work in partnership with them, and we’re in this together.”

Today’s breaking news and more in your inbox

Education stakeholders to decide reopening of schools in Abia