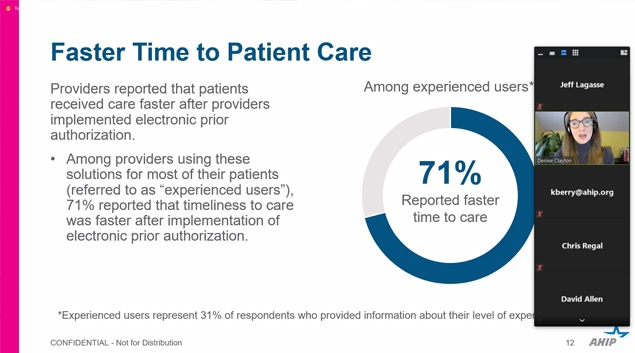 (Dense Clayton of RTI International discusses prior authorizations during a Zoom call Wednesday.)

Handling prior authorization requests electronically as opposed to manually can reduce the median time between submitting a PA request and receiving a decision — clocking in at around three times faster for a time reduction of about 69%, according to findings presented in a Zoom call today by America’s Health Insurance Plans.

The analysis, handled in conjunction with independent nonprofit analytics firm RTI International, also found that faster time to patient care, lower provider burden and improved information for providers are among the benefits of electronic prior authorization capabilities.

Denise Clayton, who leads health economics and evaluations work at RTI, said the analysis was meant to build on a 2018 consensus statement that contained broad support for PA as an opportunity to improve administrative processes. The work examined 40,000 manual and electronic PA requests from health plans, finding that the COVID-19 pandemic has little statistical impact on the findings.

In addition to faster time to decision, electronic PA processes also result in faster time to patient care, the findings showed. Providers reported that patients received care faster after the former implemented electronic processes; among those using these solutions for most of their patients — the “experienced users,” as Clayton called them — 71% said that timeliness to care was faster.

Overall, the more frequently a provider used a technology solution, the bigger the benefit they experienced in reducing burden and understanding the information. The more they used the technology, the more these benefits manifested.

To maximize the efficiencies of electronic PA, strong provider adoption of the technology is critical, said Clayton.

In December, the Centers for Medicare and Medicaid Services proposed a new rule that sought to streamline prior authorizations to lighten clinician workload and allow them more time to see patients.

The final rule, which got pushback from payers, has been finalized and is expected to be enforced after July 1.

In theory, the rule improves the electronic exchange of healthcare data among payers, providers and patients, and smooths out processes related to prior authorization to reduce provider and patient burden. The hope was that this increased data flow would ultimately result in better quality care.

The rule builds on the Interoperability and Patient Access Final Rule released earlier in 2020. It requires payers in Medicaid, CHIP and QHP programs to build application programming interfaces to support data exchange and prior authorization. APIs allow two systems, or a payer’s system and a third-party app, to communicate and share data electronically.

Payers would be required to implement and maintain these APIs using the Health Level 7 (HL7) Fast Healthcare Interoperability Resources standard. The FHIR standard aims to bridge the gaps between systems using technology so both systems can understand and use the data they exchange.

Coronavirus live updates: Trump suspends entry for foreigners who have recently been in Brazil

‘It takes willpower’: Kylie Verzosa on why mental health matters