– Governor Obaseki’s convoy was said to have been attacked on Saturday, July 25, at Oba of Benin’s palace

Following an alleged attack on the campaign train of Governor Godwin Obaseki ahead of Edo governorship election, the Peoples Democratic Party (PDP) has called on President Muhammadu Buhari to call leaders of the All Progressives Congress (APC) in the state to order.

Legit.ng reports that the chairman, sub-committee of the PDP Edo national campaign council, Raymond Dokpesi, said there had been frequent attacks by APC members in Edo state on PDP leaders.

Speaking at a conference with PDP national publicity secretary, Kola Ologbondiyan, Dokpesi said the attacks were bound to frighten the people, especially on election day.

“The week before that, when one of the leaders of Edo North died, Zakawanu Garba, it is also on record that APC members shot the gun all the way through, intimidating the three local government areas, as they were returning from a rally with the former national chairman of the APC,” Dokpesi stated. 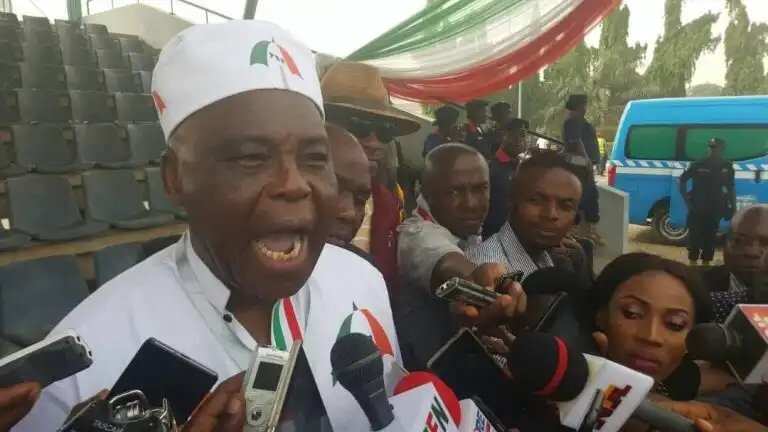 He noted that the video clip of the attack at the Oba’s palace on Saturday, July 25, by thugs allegedly showed one of the APC leaders declaring that they came to the palace well prepared.

“Look at the clear records of the people in the PDP, they are men of distinction, men of honour, peace-loving people and people ready to provide service to the people of Edo state. We are a party guided by law and our candidate, the sitting governor of the state, also has the responsibility to protect lives and property,” he stated

He demanded an unreserved apology from APC leaders to the Edo traditional institution for bringing thugs to attack guests and desecrate the palace of the Oba of Benin.

“Findings from our investigations, including hard evidence contained in the video of the attack posted by agents of the APC, clearly showed that the assault was coordinated by the APC and its leaders in Edo state to embarrass the traditional council and create a situation of chaos in the state with a view to derail the electoral process,” Dokpesi added.

Meanwhile, Legit.ng had previously reported that a cross-section of senior Benin chiefs on Sunday, July 26, rejected efforts by Comrade Adams Oshiomhole to get their support for Pastor Osagie Ize-Iyamu.

It was reported that the immediate past national chairman of the APC was seen in pictures kneeling before the chiefs and seeking their support for the party’s governorship candidate in the forthcoming poll.

Fact check: How true is FG’s claim that oil price averaged $100 per barrel for 16 years under PDP?

The chiefs refused to give their support to Ize-Iyamu, but instead advised him to try out his luck at the poll.