– In a separate reaction, CAN and NSCIA lauded the federal government for making the vital decision

Following the declaration of the federal government announcing a ban lift on religious gatherings, leaderships of prominent religious bodies in the country have reacted.

Legit.ng had reported that on Monday, June 1, government at the central announced the relaxation on the ban on religious gatherings in the country.

The decision trailed the pleas and mounting pressure from leaders of mosques, churches and other religious centres to the government.

Presidential Task Force (PTF) on COVID-19, during its daily briefing in Abuja, said the decision is based on the guidelines and protocols agreed upon by state governments. 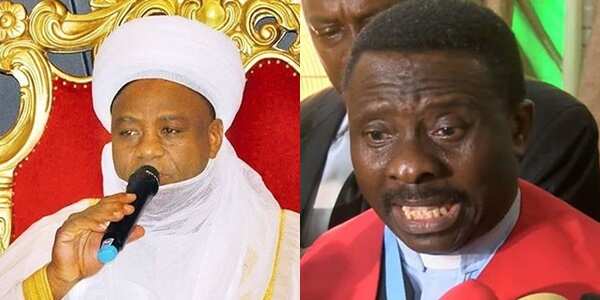 Reacting, Is-haq Oloyede and Samson Ayokunle who are both leaders of the Nigerian Supreme Council for Islamic Affairs (NSCIA) and the Christian Association of Nigeria (CAN) respectively, described the decision as a welcome development, Daily Trust reports.

Rev Ayokunle, on his own part, said the closure of the religious centres nationwide is the one that is unacceptable to God.

He, however, stated that the reopening of the religious centres will help worshippers to channel coordinated prayers to God against the coronavirus pandemic.

Meanwhile, Legit.ng reported that as the federal government relaxed the ban on religious gatherings in the country, CAN has highlighted the conditions to be met by churches before reopening.

The national religious body said it expects churches to start reopening in the first week of June after meeting the conditions.

The guidelines were released by the president of CAN, Samson Ayokunle, The Cable reports. The cleric said the measures are put together to ensure the reopening of churches does not cause a spike in Covid-19 cases.

COVID-19: Parents speak on allowing their children return to school | – on Legit TV

Nigeria doesn’t belong to Fulani-Northern CAN

‘Rape is a pandemic, must be resisted at all costs’ – Gbajabiamila